Oxford and His Dark Materials

The second season of Philip Pullman’s His Dark material is starting on BBC this Sunday.

His Dark Materials is a trilogy of fantasy novels by Philip Pullman consisting of Northern Lights (published as The Golden Compass in North America), The Subtle Knife and The Amber Spyglass. It follows the coming of age of two children, Lyra Belacqua and Will Parry, as they wander through a series of parallel universes. Every character has a demon which is part of their personality. It changes forms during childhood and reaches its final form when one becomes an adult. Lyra fights against the powerful Magistrate and has a golden compass that helps her to discover the truth. What does the Magistrate represent? Is it the Church? Philip Pullman is against power in general.

The fantasy elements in His Dark Materials also include witches and armoured polar bears; the trilogy also alludes to concepts from physics, philosophy and theology.

Although the interiors of Jordan College were all shot at Bad Wolf Studios, the crew travelled to Oxford itself for the exterior shots, with New College moonlighting as Jordan. Other Oxford landmarks you can spot in the show include The Bridge of Sighs and The Botanical Gardens. 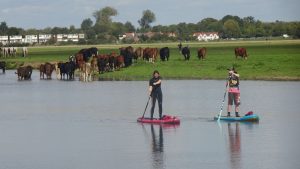 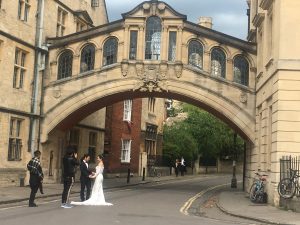 An ancient area of common land used for grazing animals. On the far side of Port Meadow is the Thames, which floods the grass seasonally and makes this a particularly magical landscape. Filled with birds, flowers, and wildlife, the meadow was an early site for landscape paintings by Turner, and in Pullman’s Northern Lights it is the location for the Gyptian horse fair. 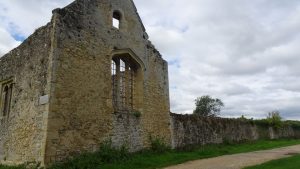 In Pullman’s fictional universe, the abbey has survived, and its nuns are the ones to take in Lyra as a baby.

In La Belle Sauvage where it is the home to the Bodleian alethiometer, or golden compass.

The Covered Market is mentioned in Northern Lights as a place that sells fish, but in our world it’s so much more than that. 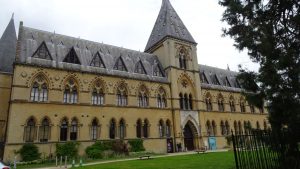 The main floor of the museum is packed with rows of curiosity cabinets, in which are displayed weapons, pottery, jewellery, masks, textiles, decorative thingummies and of course the shrunken heads for which it is famous. It is here that Lyra investigates the Tartar phenomenon of trepanned skulls in The Subtle Knife.

It is here where the Gyptians moor their narrowboats, and indeed the canal that meanders through Jericho is dotted with their moorings in real life.

Philip Pullman studied at Exeter College which was an inspiration for Jordan College in the novels. He was a schoolteacher when he started to write. His father was an RAF officer who he lost very young in a plane crash. The loss of his father and the fact that he was always away features in his works. As a child he shared a room with his younger brother and they made up stories as an entertainment. A fun fact! He is superstitious and only writes on lined and 2-holed paper.

Our Oxford, a River, a Treacle Well & Inspector Morse hiking tour also takes you to these film locations. Join Us !