`Once upon a time there were three little sisters,’ the Dormouse began in a great hurry; `and their names were Elsie, Lacie, and Tillie; and they lived at the bottom of a well—’

And so these three little sisters—they were learning to draw, you know—’

You can draw water out of a water-well,’ said the Hatter; `so I should think you could draw treacle out of a treacle-well-eh, stupid?’
`But they were in the well,’ Alice said to the Dormouse, not choosing to notice this last remark.
`Of course they were’, said the Dormouse; `—well in.

Binsey and the Church

My rambling took me on the Thames Path around Oxford. I took a bit of detour and walked to Binsey. As I approached, the first thing I found was a charming 12th century church. The Church of St Margaret of Antioch stands on the site of one of the original monasteries of St Frideswide. 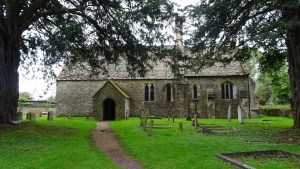 According to legend St Frideswide, the patron saint of Oxford who lived in the 7th century, escaped to Binsey to avoid marrying the Mercian prince Algar. The prince was blinded by lightning while looking for her, her prayers brought forth a healing spring here, and she cured his blindness with its water. She didn’t marry and founded  a monastery here and became an abbess.

The well outside the church was famed for its healing properties, and many pilgrimages were made to Binsey in the middle ages. There were crutches of cured cripples adorning the church in the past.

This is the well that inspired Lewis Carroll, and it is described as a treacle well in Alice in Wonderland. 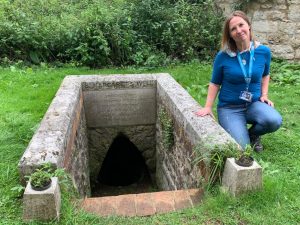 Do you know what treacle means ?  It is an old English word for medicine, and was also used to describe dark coloured undrinkable water, which from its foul palate was associated with the commonly held taste of medicine.

Binsey and its farmlands belonged to St Frideswide’s Priory during the 14th and 15th centuries, after the dissolution it was incorporated into Christ Church, a college of Oxford University, which now owns all of the buildings in Binsey. 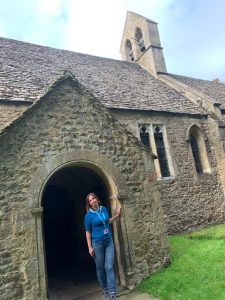 If you enjoy walks and would like to see the church and the famous well. Join Our new Historic hike around Oxford. The first date is 12th of September.