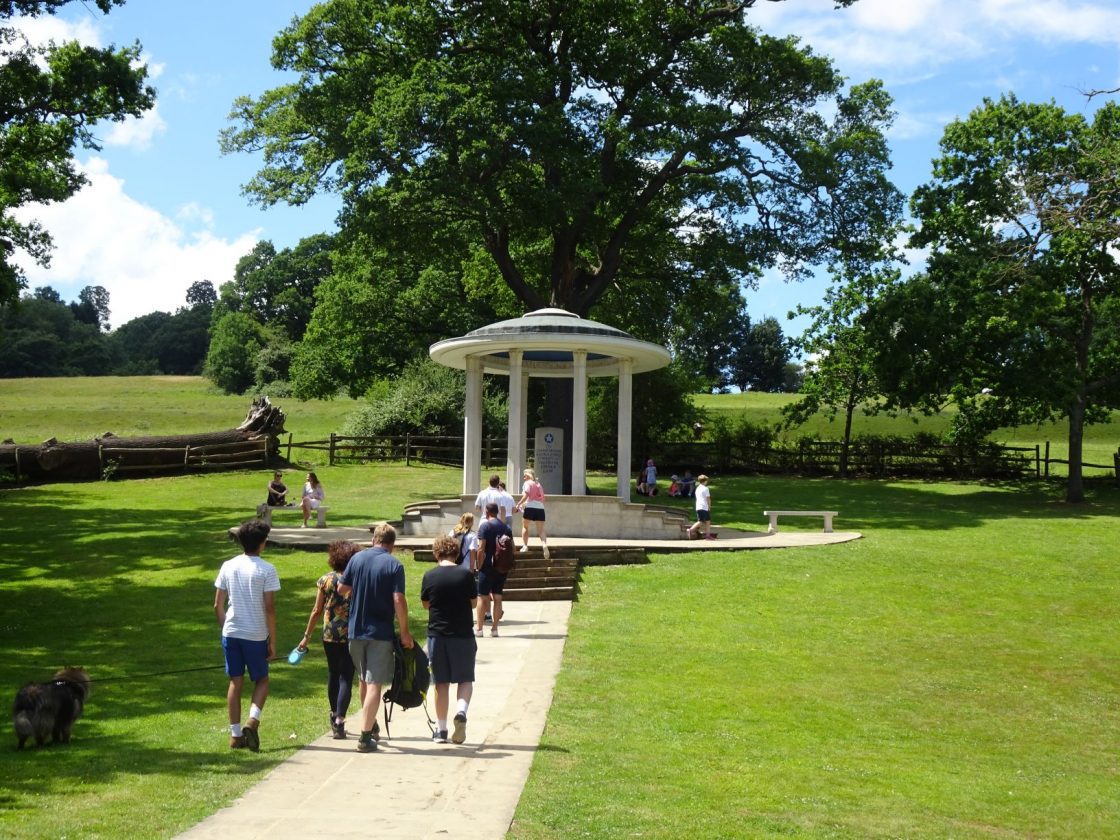 The Story of the Magna Carta

Magna Carta, meaning the Great Charter, held the King accountable to the rule of law, just as it did his subjects. In total it was made up of 63 clauses, covering law, liberty, and the church.

The most famous and important of these clauses is :

‘No man shall be arrested or imprisoned except by the judgment of their equals and by the law of the land.’

To  no one will we sell, to no one deny or delay right or justice. ‘

It was implemented through a council of 25 barons. It was the origin of parliament and democracy.’

King John was a highly unpopular King. He was a womaniser, he was always trying to put people in their place, fought expensive wars with France and lost lands, He imposed heavy taxes on the barons, had taken away their castles, their lands and, above all, he had established a new kind of law court presided over by the King, to which business – that previously had gone to the courts of the barons – now went.The barons rebelled, captured London, met with King John at Runnymede on the 15th of June 1215 and forced him to sign the Great Charter.

And although Magna Carta was intended to create peace between King John and his rebellious barons, England was plunged into civil war after the Pope declared the Charter invalid.

When King John died in 1216, nine year old Henry III took to the throne. To keep the peace, Magna Carta was reissued several times during the 13th century, until it was finally made part of English law.

In the 1600s, English lawyers used Magna Carta to challenge King Charles I. At this time, the King could ignore parliament and imprison anyone who opposed him. Inspired by Magna Carta, Sir Edward Coke wrote the Petition of Right, which set out to limit the King’s powers.

Magna Carta was taken overseas to America by the first British settlers. Many American colonies based their own laws on Magna Carta. During the American Independence war Magna Carta became a symbol of American liberty, and its principles were echoed in the Declaration of Independence and the Bill of Rights.

In the 1800s the Chartists, inspired by Magna Carta, created a ‘People’s Charta’ to fight for all men to have the vote.

Nelson Mandela declared his admiration for Magna Carta and for Western democracy, which he contrasted with the oppressive South African regime.

Perhaps the most significant influence of Magna Carta today is the Universal Declaration of Human Rights. Written after the atrocities of World War II, the declaration states that people around the world are protected by fundamental human rights, regardless of their citizenship, race, gender or beliefs.

Let’s look at some of the memorials at Runnymede

Designed by Mark Wallinger, this lovely artwork is based on Clause 39 of Magna Carta, and inspired perhaps by the inscription on John Keats’ grave monument. It combines sky, light and water creating a space for reflection both physically and contemplatively. I find this monument very peaceful, it is a lovely spot to sit down, observe and reflect. 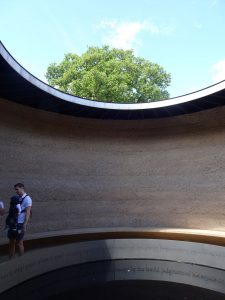 Designed by Edward Maufe and erected in 1957 by the American Bar Association.  It contains a pillar of English granite on which is inscribed “To commemorate Magna Carta, symbol of Freedom Under Law”. 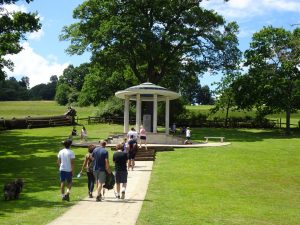 Steps of Individuality and JFK Memorial

The steps lead up the hill to the JFK memorial designed by Sir Geoffrey Jellicoe. The theme is Bunyan’s Pilgrim’s Progress and the notion of life, death and spirit. The Pilgrim, an ordinary person, travels from his hometown representing this world to the top of Mount Zion and heaven. Visitors reach the memorial by treading a steep path of irregular granite steps, intended to symbolise a pilgrimage. There are 50 steps in total, representing the 50 States of USA.  Each step is different from all others, with the entire flight made from 60,000 hand-cut granite setts. 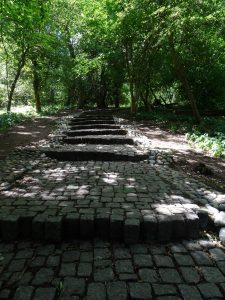 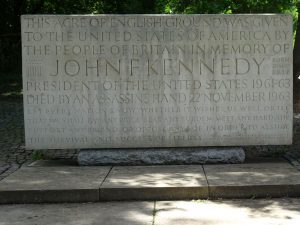 The Jurors artwork was commissioned to mark the 800th anniversary of the sealing of Magna Carta. The sculptor Hew Locke created 12 bronze chairs each of which is decorated with symbols of past and present struggles for freedom, equality and the rule of law. The artist invites participants to sit, reflect upon and discuss the themes represented. 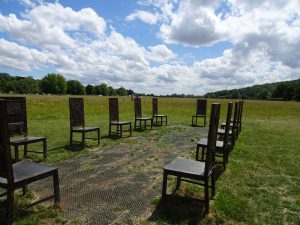 Chair 1: Lillie Lenton, wearing medals and bandages relating to the imprisonment and activism of suffragettes, Lenton’s image is derived from a 1912 surveillance photograph taken in Holloway Prison. In the early 1900s the Suffragettes used Magna Carta to argue that all women should also have the right to vote.

Chair 9: On the back of the ninth chair we find representations of ‘The Golden Rule’ which states you should treat others as you would wish to be treated yourself. Versions of this concept are found in all major world religions and philosophies and the phrase is expressed on The Jurors in 14 different languages.

Chair 5 : On the back of the fifth chair is a portrait of poet Phillis Wheatley, the first published African-American woman (1773) 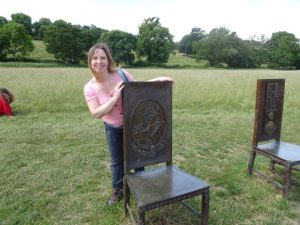 Where can you see the Magna carta ?

There are four surviving copies of Magna Carta that were dispatched within the month to various bishops, and possibly sheriffs, throughout the Kingdom. The British Library has 2, there is one each in Lincoln Cathedral and Salisbury Cathedral.

If you would like to find out more and visit Runnymede, join us on our historical hiking tour from Runnymede to Windsor or get in touch with us for private tours.